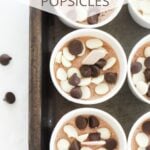 Emulsification was the dinner table chat in our house the other night. Not our usual shallow banter, you may well be thinking. It went something like this -

Me - Sometimes. Not always though. Why do you ask?

#1 teenage son - We were learning about emulsification in school today and the teacher said that homemade salad dressing is a great example of how it works. Nobody made their own, though ... so the example didn't really work.

Now I have it on good authority that these Chocolate Fudge Popsicles also rely on the magic of emulsification and some may say that they are a tad more exciting than a bottle of salad dressing.

I started off experimenting with these beauties for Hella's birthday sleepover but soon realized that mini chocolate lollies for adults are definitely a 'thing' when they taste this good.

For the first batch, I went a bit fancy and had three bowls of melted chocolate which I planned to drizzle in a Jackson Pollock style .... or reminiscent of Ice Magic. Whichever you can relate to. To be honest, the faff far outweighed the increased eating pleasure and I soon gave up on the fanciness. Now the day of production was very, very humid and the kitchen was right up there on the stuffiness scale, so you might still want to give it a go, but fundamentally, trying to combine warm(ish) melted chocolate and frozen Chocolate Fudge Popsicles was, I suspect, never meant to be. I had enough success for one photo though.

So for the second iteration, I went simple. Chocolate chips .... white and dark ... sprinkled on the top. End of story.

There's something akin to a chocolate brownie in the taste sensation that is one of these Chocolate Fudge Popsicles. I can't quite put my finger on what it is. All I can say is, try them to discover it for yourself.

So there you have it ... Chocolate Fudge Popsicles that are (probably) too good for the children.

Yet more proof that everything tastes better when served on a stick. And sprinkled with chocolate chips. 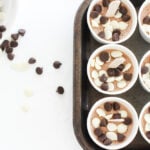 These are seriously chocolatey and feel so decadent. Perfect for a sneaky treat but small enough that they're not over-facing.

Tweaked from a recipe in the NY Times

There's very little hands-on preparation with these little beauties but you'll need to freeze them for at least 12 hours before they are ready to take out of the moulds.