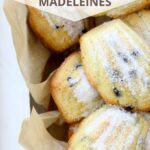 There's nothing traditional about putting either chocolate or orange into madeleines and it's probably even more of a curved ball to sneak in both. But I had oranges (a bit of an orange mountain if the truth be known) and chocolate chips (no surprise there) and I wanted to make something quick and pretty for an 'after-school-before-swim-gala' snack for four giggling swimmer girls to snack on en route to the inter-school competition. Because we all know that swim galas are as much about the snacks as they are about the swimming - especially when you're eight, nearly nine years old.

And when the swim gala means that you get to leave school early (even if it's only 20 minutes early) well then, life is good. And if there's a bit of a snack to enjoy in the car while you're giggling with your fellow swimmers - then life is even better.

And what a lot of chatter and giggling there was too. It went something like this -

In summary, it's a whole different world from driving a bunch of boys around. Apart from the burping.

So back to the Chocolate Orange Madeleines ...

Traditionally, madeleines are lemony, but I do find that lemon as a flavour is a bit iffy with children (well my children anyway) - hence the orange and definitely the chocolate.

So what is great about these little Chocolate Orange Madeleines?

So the girls had giggled, they had chatted, they had snacked - all that was left was the swimming. And did they swim? They only swam their team to victory. That kind of tremendous result deserves celebratory ice lollies for everyone. Life really is good. 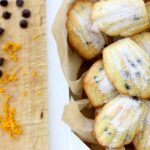 Pretty, delicious and easy to make. And as a bonus, they make you look terribly clever. It's the fancy shape - I'm sure of it.