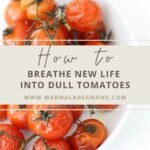 How can you coax some flavour out of even the dullest, most lack-lustre tomatoes?

Simple ... by oven-roasting them.

And before you tell me that you don't do that kind of thing; that it's too much like hard work; that life is too short etc - let me tell you that it's ridiculously easy. You'd think I was a weirdo of the highest order if I tried to convince you that it would change your life, but put it this way, I feel sure you won't just do it once.

So what are we trying to achieve in terms of flavour?

So here's the thing ... you know for sure when you've eaten a beautiful, tasty, sweet, intensely flavoured, perfectly ripe tomato - but how often does that actually happen? More often than not 'watery' and 'insipid' is what springs to mind.

By chance I had two tomato experiences yesterday which were at either end of the flavour spectrum. The first was eating a couple of locally grown, organic, cherry tomatoes from those wonderful Dubai purveyors of all things fresh, local and 'grown with love' RIPE. They looked as sensational as they tasted and were mini explosions of flavour.

By contrast, in the evening, we were at a Greek restaurant for a family dinner. It was a lovely place with a great-looking menu. I ordered a greek salad (it would be rude not to) - plenty of feta, some nice olives, but those tomatoes ... oh dear.

It's true that over the last 10 years or so, the quality of tomatoes available to us wherever we live has improved immeasurably. They are now grown for flavour and the variety on the shelves is often extensive. But they do come at a price and certainly, I don't always want to splash out to that degree on something that is a staple in our weekly shop. And to be honest, tomatoes also over-promise and under-deliver and this is a way to avoid waste. And disappointment.

I would say that hardly a week goes by without me roasting some tomatoes - they are so very tasty and always a useful taste flavour bomb in a meal.

Go on, grab those wishy-washy tomatoes and get roasting. It won't necessarily change your life but this could be the start of a beautiful new relationship. Ready, steady, roast …