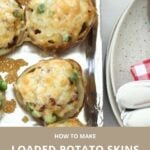 There's nothing new about potato skins. They've been around for ages and you've probably enjoyed them both at home and also when you're out and about. But sometimes, for me, inspiration comes in the form of a reminder rather than learning about something new. Is it the same for you?

So think of today's post as a gentle nudge ... a reminder that Loaded Potato Skins are an ideal meal or snack for busy lives. These ones get a little bit of spice from some fried off chorizo, a touch of sweetness from a few peas and topped off with plenty of golden, bubbling melted cheese. Are you drooling yet?

Here's how I put together these Loaded Potato Skins

We eat them most often as a mid-week dinner - normally post-swim training - Loaded Potato Skins, perhaps some stir fry vegetables and a tin or two of baked beans. For me, there's always a dollop of chutney too. Perfect job and popular with the whole family.

So, are you suitably reminded of all that's great about Loaded Potato Skins? What will your filling of choice be? 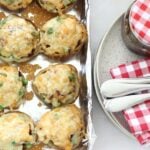 A bit of spice from some chorizo, a touch of sweetness from a few peas and topped off with golden, bubbling melted cheese. Drooling yet?

I tend to work on 1 large or 2 medium sized potatoes per person - here I made enough for 4 (plus a few leftovers).