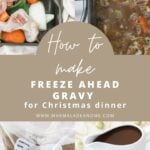 No need to wait until Christmas dinner to prepare your gravy.  Make it days or even weeks beforehand.

Let's be blunt. This make-ahead gravy is my most significant Christmas dinner game-changer.  It's the tip that makes my heart sing - it really is the answer to my 'no fuss on the day' prayers.

But before we get into the detail, let's address the elephant in the room ... I know, I know, you may well have confused the photo above for a rather lovely picture of ... chocolate sauce. Delicious chocolate sauce I agree.  Chocolate sauce served in a gravy boat admittedly, but definitely more chocolate sauce than gravy.

It was only when I went to edit the photos that it struck me and by then the gravy had been sitting in the freezer for a good few hours. Now I realise that I needed a few visual clues in the photo - a sprig of rosemary maybe, even a few slices of turkey or perhaps a sprout or two. Next time I'll be on it but until then let's talk gravy ... while we secretly dream of chocolate sauce!

I've spent all of my adult life not much liking gravy.  I don't like the way it makes everything go soggy and I dislike the way it drowns all the other flavours on the plate.

In the UK,  gravy is mostly served with roast dinners - a British institution - but you may remember my confession that roast dinners weren't a big thing in our family.  The closest we got was lamb chops, cauliflower cheese and baked potatoes on a Sunday evening - always watching Howard's Way. Remember that?!  Now I'm showing my age. The sauce on the cauliflower cheese probably acted as a pseudo gravy, in that it provided a bit of extra moisture. Sometimes though, Mum would make her own version of gravy - a stock cube dissolved in boiling water - now that really does make everything soggy!  Sorry, Mum.

I wouldn't say that I was scarred by these early gravy experiences, but this lack of gravy in our house has proved to be an annoyance for my children. Because, as every Mum knows, when you're the main cook in the family, you don't often cook or serve the things that you don't much like yourself. Luckily my dislike list is not extensive - fried eggs, beetroot in vinegar, mashed potato and gravy. I can get away with the gravy thing for most of the year but at the Christmas dinner table, a lack of gravy is a complete faux pas. I know this for certain as - SHOCK HORROR - I did it one year and I think it is probably still mentioned in family hushed tones.

Over the last few weeks,  we've racked up a good number of tips for making sure that Christmas dinner is gorgeous and no fuss, but currently we are still making the gravy on the day, in a hot, steamy, frantic kitchen.

But fear not ... here is your Christmas wish granted - you CAN make your gravy days ahead, even weeks ahead - before the turkey has even gobbled into your home.  It's a Christmas miracle to behold.

So what do you need to know about this Make-Ahead Gravy?

No need to wait for the turkey to make the gravy - prepare it days or even weeks beforehand and freeze it. Genius.

So, instead of waiting for the grand entrance of the turkey, you're going to use some chicken wings (there is SO much flavour in this part) + a few vegetables + a few herbs and mix them with a little olive oil in a deep-sided roasting tin.

Now let them roast and caramelise in the oven of your empty, calm kitchen which is free of festive frenzy.  When they've had their time, give the roasted yumminess a good mashing (a bit of oomph is required here to extract all the flavour) and add some flour and water.  Let it bubble on the hob for 30 minutes and then strain through a sieve.

The result?  One litre of your loveliest, smooth, meaty, tasty, ready-to-go, make-ahead gravy and all set for the fridge or freezer.  On the day you can add the juices from the turkey if you fancy it and also a touch of cranberry sauce for extra depth, but it's no drama even if you don't.

Christmas gravy in the bag.  Literally.

No need to wait until Christmas dinner to prepare your gravy. Make it days or even weeks beforehand.