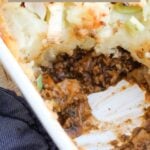 Today is a sad, sad day.

Finally, it has happened.

It was inevitable but I never really believed it would actually be here.

I've known it's been on the way for a while now, but to be honest, I think I was in denial.

There ... I said it ... and it sounds too weird for words. My little boy is now definitely a big boy.

He certainly eats like a 'big boy' - much, much more than me and more than Steve too.  But then when you spend a large chunk of your life powering up and down a swimming pool - it should come as no surprise. Most meals are followed by the question, "Is there any more?" and an hour or so later a large bowl of breakfast cereal will appear - just to fill that last little gap.

And if you were to ask him what his favourite dinner was .... firstly, you would never get a quick answer - it's a serious subject after all ... but when he finally decides, it would almost always be ... Shepherd's Pie. He will eat anything (except for melon - random, I know) but given the choice, a traditional, home-cooked, comfort food like Shepherd's Pie wins it for him.

There may seem to be a lot of ingredients and a few extra stages in this Shepherd's Pie which may make you question whether this really is "gorgeous food - no fuss".  What would I say to that? ... sometimes it's necessary to up the fuss, just a touch, in order to up the gorgeousness enormously.  It is absolutely worth it.  Trust me.  This is a Delia recipe from How to Cook - Book Two and for me has only required a few tiny tweaks - more potato, less leeks and a dash of Worcestershire sauce.  Most of the time I will double the quantities in order to make one family-sized pie and a number of smaller ones to freeze - they are ready to freeze at the end of stage 8.

Now I'm off to let the hems down on Joe's school trousers.  It wouldn't do to have him looking like the village idiot, now would it? 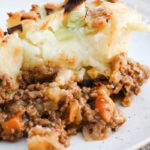 Easy to prepare ahead of time, freezes like a dream, re-heats beautifully, tastes sublime and ... is nutritious and filling.