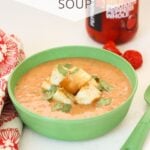 "Peanuts in a soup?"

"Did she say peanuts in a soup?"

Hold on a second.

Before you run for the hills screaming, "It's wrong!" ... "Peanuts in a soup is just plain wrong!", let me say one thing - think of Spicy Peanut and Vegetable Noodles ... Is that better? Now hold that thought ... keep it there ... stay with me for a few minutes ... have faith.

Time for a quick story before we get into the recipe? Great. Here goes ... it'll be worth the wait.

There's always a great deal of food feedback, rating and ranking that goes on around our dinner table - often involving a 'marks out of 10' approach and followed by the inevitable 'and what would you change to improve it' question. It's all part of the ongoing process to decide whether a new dish is a) bloggable, b) worthy of rework/tweaks, c) one to ditch.

Encouraging feedback for these dishes means that I also have to expect unsolicited feedback on pretty much every food item that finds its way into lunch boxes, appears as part of dinner or simply makes it through the front door.

#1 and #2 teenage sons both have gargantuan appetites and, as well as a tightly packed lunch box, they also take a food flask to school with them every day.  Most of the time I have a stash of soups, stews and chillis in the freezer that will do the job perfectly, but I had been a little too eager with my 'post-Christmas-eating-from-the-freezer-and-pantry' and last week, the freezer was unable to provide. I did a couple of soups for flasks during the week (a carrot and coriander and another one - clearly not that memorable). There was feedback of course and it was that both soups were OK but rather bland. That was telling me ... I suspect that 'subtle' translates into 'bland' in the hands of teenage boys, but nevertheless, I set myself a challenge to find a more gutsy soup alternative, but still using ingredients that probably didn't require a trip to the shops.

And I think I've found it in Spicy Peanut and Vegetable Soup. This is quite the yummiest soup I've made in ages and here's why ... There are 2 killer ingredients that turn a regular vegetable soup into something ... dare I say it? - exotic. The key mystery ingredient is ... DRUM ROLL, DRUM ROLL ... crunchy peanut butter - and quite a lot of it too. Yet, surprisingly none of my family of food critics were able to identify it during sampling. The other hard hitter is the Piquanté Peppers from a jar (I used the Mild variety from Peppadew) - warmth without searing heat. Perfect.

But here is the BUT - because there is a BUT ... Despite the spectacular flavour and the easy method for this soup, it really isn't the most handsome of dishes ... 'not a looker' to quote #1 teenage son. It scored a 9/10 in the round the table rating and the only suggestion to improve it was to make it look better!

The problem is that the combination of the peanut butter and the crushed tomatoes produces a pinky/orangey colour and, although I hadn't realised it before, soup should not be pinky/orangey. Sad but true. It didn't look horrendous, but still less than gorgeous.

So, determined that this soup was eminently bloggable, I found the perfect solution - paprika croutons - delicious, crunchy and covers up a big chunk of the surface area until you've had that 'love at first slurp' spoonful.

And with or without the croutons, take it from me, here's why you'll be trying this Spicy Peanut and Vegetable Soup

It's still unlikely to be a soup whose looks send it viral, but trust me, this is worthy of dimming the lights and diving in. 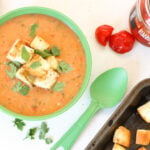 Spicy Peanut and Vegetable Soup will take you somewhere new - not just a new country, maybe even a new continent. Peanut butter gives depth & the peppers give warmth.

Tweaked from a recipe by the New Covent Garden Soup Company.