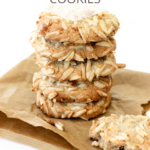 One of the things about being a food blogger is that you rarely stay loyal to a favourite dish or recipe for long. Ask me what my favourite recipe is today and it probably won't be the same as it was yesterday AND in all likelihood, it will be the most recent success that I've had in the kitchen ... that great dish that I am giddy with excitement about.

But if you ask me the question today, here and now, right this minute, my answer will be these Almond Cookies. 100%.

I'm really not good at being pinned down on a favourite thing when it comes to anything at all foodie ... it's a bit like asking me which is my favourite child ... (although today it is #2 teenage son because he got out of school super quickly at finish time, hence avoiding that knock-on effect of being late leaving school and therefore being late for everything else for the rest of the afternoon. Thanks, honey.)

Favourite chef? Favourite cookbook? Favourite ingredient? Favourite place to get coffee in Dubai, London, Bath ...? Favourite sandwich filling? Favourite pizza topping? Favourite ice cream flavour? Ask me any of these questions and I will ponder for an eternity, there'll probably be a debate (even if it's just with myself) and in the end, I'll most likely ask for extra time.

But ask me about my Favourite Meal EVER and I'll answer in a flash ...

Lunch at Honey & Co not far from Euston station in North London, August 2014. A muggy day, spitting with rain; no children (they were having a lovely time with gorgeous grandparents); tiny restaurant (20 covers perhaps); next to a tanning parlour (sometimes it's not about the location); simple decor; 'Rachael' the most perfect, charming, vivacious, infectiously enthusiastic waitress in the history of great waitresses; a table outside on the pavement (inside was PACKED); a couple of glasses of chilled red and then, the food ... perfectly ripe white peaches, warm Arabic bread, creamy goat's cheese, crispy leaves, fresh herbs, melt in the mouth lamb, tahini, onion fritters, roasted plums, tiny almond cakes, beautiful green pistachios.

This was Middle Eastern food made with immense skill and respect for wonderful ingredients, but mostly this was simple food made with love. We ooohed and aahhhhed and gushed and completely fell in love with this magical foodie heaven created in a small terraced building in the most unlikely of locations. Rachael, the waitress was also a great saleswoman and suggested that we may also love their cookery book ... she could get it signed by the chef-owners too. Nice idea we said but we'd rather it was signed by 'Rachael' the most perfect, charming, vivacious waitress in the history of great waitresses. And so she did.

And these Almond Cookies are from a recipe in that very same book - just tweaked a little. These are sophisticated, grown-up cookies - possibly too good for the children (although that has never stopped them) - and glorious with a strong coffee, or a glass of wine. I have also been known to breakfast on one as I've dashed out of the door.

So why will these Almond Cookies be your favourites?

Almond Cookies ... I declare undying love for you. You are my favourite. Today. And almost certainly tomorrow too ...

This post contains affiliate links. If you buy something through any of my links, I may earn an affiliate commission at no cost to you. I recommend only products that I genuinely like. Thank you. 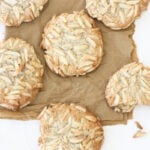 These Almond Cookies are moist and mouthwateringly delicious. There's a hint of orange + a spice or two, but mostly it's the glorious flavour of almonds.

Tweaked from a recipe by Honey and Co.