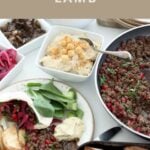 I love leftovers, but in a house of enthusiastic eaters, they're almost always a rare commodity. 'Longing for leftovers' - that's me. With leftovers, I celebrate the fact that dinner the next day is a breeze, packed lunches are a cinch and sneaky fridge snacks for ravenous teenagers are straightforward.

But you can have TOO many leftovers. There are those occasions when even a packing miracle won't squeeze all the leftovers into the fridge and of course, there are the leftovers where nobody liked it the first time, so why would they enjoy it as leftovers? And then there are times when you just have TOO MUCH of one thing - and for me, this week it was Hummus.

We'd had a barbecue at the weekend - a great bunch of people representing 13 nationalities (can you believe that?) There was much chat, loads of laughter and, of course, heaps of food. We took care of the meat for the grill and beyond that, it was a 'designed' Pot Luck - because as you may remember, I don't do Pot Luck at its purest. That'll be the control freak in me.

Now #1 teenage son is a keen hummus enthusiast (served with celery is his favourite) and also, I like to use it as a sandwich filling. But after a couple of days, nobody wanted it in their packed lunches anymore, so some reinvention was called for.

I also needed to create a quick dinner for the family (I was doing a mid-week trip to the cinema to catch Spectre. What did you think of it? I'll come clean and admit that I was pretty non-plussed ... especially the part where I fell asleep. And I'm normally a fan. Dull story, I thought. Maybe I'm still mourning the loss of Judi.)

Anyway back to that quick dinner ...

Hummus needed to play a big part here but I needed something else to cause a distraction. And this Chilli Cumin Lamb was just the ticket. I used minced lamb which I speedily fried up with a little garlic and a lot of spices. The kitchen smelt SO good. Tossing it in some pomegranate molasses and stirring through a few pomegranate seeds was the final flourish and lifted it from being reminiscent of a 1970s tragic dinner to a magical dish.

So to bring it all together, dinner looked like this -

This was a winner of a dinner and in fact, it was hard to drag myself away to get to the cinema. There are no set rules for what you include here. This combination worked wonderfully but you could swap and change with whatever you fancy but, more importantly, whatever leftovers you are 'enjoying'.

This mezze style dinner with the Chilli Cumin Lamb at its heart is most definitely a keeper for me -  a mid-week easy dinner with the kind of relaxed DIY vibe that I love. Maybe I'll stock up on more hummus. On seconds thoughts, right now we need a Hummus Holiday. But don't let me stop you ... 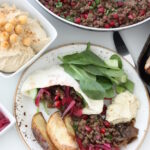 Fried minced lamb with a little garlic and a lot of spices. And tossed in some pomegranate molasses was the final magical flourish. Serve this tasty lamb dish as part of a mezze style spread. It works well with hummus, caramelised onions, a green salad, arabic breads and a few chips.

Adapted from a recipe in The Guardian by The Kitchen Cooperative