Home » No Fuss Tips » How to make food flasks easy 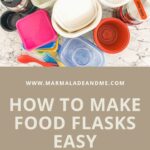 Every school day (apart from Thursday when the day is too short to warrant it) my two teenage sons take a food flask with them to school. That's in addition to a pretty sizeable lunchbox stuffed to the gills with nourishment for the day. They are also (when I remember) armed with some emergency money for a canteen trip just in case (god forbid) they may experience a food crisis before the last bell. They are fully covered.

I don't enjoy packed lunch production - I think it's the 'day-in-day-out' nature of it that messes with my head - but I can see that it's a necessary evil.

And I realised some time ago that making the food flask element of packed lunches easy (or at least easier) HAD to involve making the most of the freezer.

So here's how I maintain a bit of food flask sanity -

It's not rocket science, I know, but then most tips aren't - just a useful way to find the shortest path through daily drudgery. And I bet there aren't many parents who don't view packed lunch production in those terms.

Hella has started feeling the love for a food flask too, but I'll hold off for a while with her - at least until I've found a suitable 3 portion container!

And here's an update on food flasks - some years later ...

Since I first wrote this post, I've been through every combination of food flasks and have had to tweak my approach accordingly. First I had both boys taking a regular flask to school 4 days a week. Then there was that short period when they were both 'STARVING, Mum' and so we upped the game to an XL size flask for them both. Now both boys are away at university in the US and Hella (don't be fooled by her small size) also has a healthy appetite and wants a food flask to eat en route to swim training after school every day.

My approach to food flasks has stayed largely the same

This post contains affiliate links. If you buy something through any of my links, I may earn an affiliate commission at no cost to you. I recommend only products that I genuinely like. Thank you.