Saturday evening is the end of our weekend, here in Dubai. It's usually a time for a final bit of family time before the new week starts - normally a dinner together (something like this Sausage and Puy Lentil Pot, which I can make earlier in the day, would fit the bill) and the hope that -

And with Saturday night dinner comes that weekly debate ... and it's a BIG ONE - who is going to fill the food flasks in the morning? Because the thing is, it's one of THOSE mornings - one of those mornings when #1 and #2 teenage sons have swim training and for them, that means leaving the house at a time with a 4 in it.

Packed lunches will already have been made by the Packed Lunches Fairy the night before (see above) but as Sundays for #1 and #2 teenage sons are LOOOONNNGGG days (ie start at an obscenely early hour by throwing yourself into a pool of 26° water and ploughing up and down for 90 minutes, then go to school for the day and finish by throwing yourself into another pool of 26° water and ploughing up and down for another 90 minutes) food flasks are essential to get them through the day - and they are on their own in the kitchen at that time in the morning. Even with the addition of food flasks, I can still guarantee that the first words when they walk through the door in the evening will be, "What's for dinner?" - but that's normal, isn't it?

#1 and #2 teenage sons loosely take turns to be on flask duty but here's the thing .... it also hinges on WHAT is going to be in the flask, because not all filling duties are equal.

A pasta dish or a potato dish or indeed anything that is more solid than liquid is '5 minutes in the microwave on MEDIUM, stir and you're done'. That gives the filler enough time to read everything that there is on his phone for 4 and a half minutes and then neck a bowl of cereal in 30 seconds. Done and done.

If, however, it's a soup day - let's take this Moroccan Chickpea Soup as a perfect example - then it's 'put the soup into a pan, turn on the hob, find a wooden spoon, give it a stir, come back to it a couple of minutes later to give it a stir (making sure it hasn't boiled over), then hang around in the kitchen until it looks ready'. In an early morning, teenage world that's both hassle and torture.

This Moroccan Chickpea Soup is definitely one of my favourites. It's adapted from the BBC Good Food website (the original recipe seems to be no longer available) and has become a regular in my food flask (and sometimes dinner) rotation. It's packed with delicious vegetables, has protein from the chickpeas and is lightly spiced, but it's the last-minute addition of lemon and parsley that really make the flavours do a happy dance - albeit not an early morning happy dance because nobody does that.

And let's be clear - my teenage sons do like eating this, they would just rather it be served to them piping hot and ready to go (and probably not have to put their own bowl in the dishwasher afterwards). But who wouldn't, I guess? 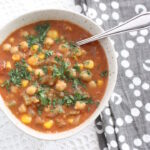 Packed with delicious vegetables and lightly spiced, but it's the addition of lemon & parsley that really make the flavours sing.

Adapted from a recipe on BBC Good Food