Home » Life » How to do Halloween with no fuss 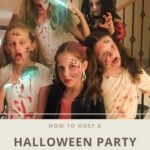 There was a time when we used to have a Halloween party every year. There were always plenty of games - the 'Mummy' game being a particular favourite.
TOP TIP - Don't go too 'value' on the loo roll or it rips just by looking at it and that's no fun for anyone.

The Mummy game was always closely followed by the 'Who Can Clear the Garden of the Most Shredded Loo Paper' game ...

And then as the children got older, Halloween always seemed to fall in the half-term holidays and the parties fell by the wayside for a few years. To illustrate how many years have passed since our last spooky gathering, Hella's costume of choice back then was a super cute witch (complete with pink tights and a frilly skirt) and for Halloween 2016, gruesome zombies were the order of the day. Oh, how things change ...

So how did we do Halloween this year - with no fuss and on a school night too?

The box of decorations that comes out every year is the secret weapon here - particularly cobwebs and hair-raising pipe cleaner spiders. Red light bulbs gave a ghoulish glow and plenty of crooked pictures transformed our downstairs into a haunted house (while playing havoc with any OCD tendencies).

Step 2 - Invite a few friends over.

It was a school night, so the emphasis for a no-fuss Halloween party was on the 'few' here. Let's face it, both teenage sons are completely too cool for Halloween these days (although it wasn't that long ago that they were huge enthusiasts - guess which is which?)

But when you're 10, Halloween is where it's at, so Hella designed her guest list of 4 (I really did mean it when I said a FEW friends) and we were on our way.

TOP TIP - Don't be too last minute with the invitations, not least because the girls need plenty of time to discuss outfits, hair, make-up and generally whip each other up into a frenzy of excitement. Experience would suggest that it's more straightforward for boys.

Step 3 - Do some spooky food for your no fuss Halloween party.

A 'blood' spattered paper tablecloth was the perfect backdrop for my Halloween creations.

TOP TIP - Put some newspaper under the tablecloth before you commit the savage act. Our garden table now looks like the aftermath of a scene in Midsommer Murders.

And then there were -

Everyone filled their boots and there were plenty of leftovers for teenage sons, who strategically arrived home after the girls had all left. Think they planned it that way.

Step 4 - How about some games for your no fuss Halloween party?

There have to be games and it's a chance to wheel out those family favourites.

Step 5 - Get dressed up for your no fuss Halloween party

There was blood, hairspray, backcombing, ripping of clothes, pinning clothes back together again, ghostly white faces, red lips and soon our little angels had become little zombies.
TOP TIP - Allow plenty of time for this, it's such a big part of the fun.

Hella's high moment was bagging a Patchi chocolate (best fancy chocolate in Dubai) at the first house but it was balanced by the low point of being fobbed off with an empty box of raisins later on. We all had fun and the weather was perfect so that always helps.
TOP TIP - Don't leave it too late to go out - lots of the houses that we came across had shut up shop for the night.

So there you go - that was our no-fuss Halloween. Much fun was had by all and I imagine everyone slept well (me included). It was probably pretty quiet at school the next day too ...