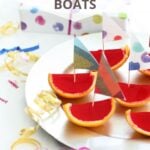 When it comes to birthday parties, there are some food traditions that stand the test of time. Others less so.

#1 and #2 teenage sons are a bit beyond the 'party games + birthday tea' formula, but at the ripe old age of 9, we've still got one (maybe two) traditional parties left for Hella before my little girl is practically a teenager.

There are rarely many sandwiches - my theory on sandwiches at a birthday party goes like this - cut out the middle man ... make the sandwiches and put them straight in the bin.

I first made these Jelly Boats in 2007, our last year of birthdays in England before we moved to Dubai. #2 teenage son was turning 5 and it was a village hall party with lots of energetic 'let's get them really exhausted' games, followed by a story with dressed up characters and then the party tea. So let's skip to the main event - those Jelly Boats. It was their first voyage and oh what a voyage. Forget the sandwiches (of course), ignore the crisps, push the cakes to one side - the Jelly Boats were where it was at. Some children loved them to an obsessive degree but everyone loved them to some degree. And they just keep coming back - year after year.

They're simple - halved oranges with the flesh scraped out and then filled with jelly. Allow them to set and then cut them in half again.

And why do these Jelly Boats stand the test of time?

I tend to make a few paper sails to adorn the Jelly Boats (wrapping paper + cocktail sticks + a glue stick) but that's more for my enjoyment, I suspect.

Now I'm not certain of this, but I imagine that a group of teenagers would go for these too - probably without the sails. Both teenage sons were desperate to 'sample' the boats as I made them and hovered around the table to scoop up any leftovers. And for MUCH older 'kids', I'm now wondering about Vodka Jelly Boats - but that's another story ...

So stand aside birthday party sandwiches and make way for the stars of the show - the Jelly Boats.

Oh and don't for one minute think that these can ONLY be rolled out as birthday party food - any occasion is perfect for a few Jelly Boats. Go on - make them your signature dish! 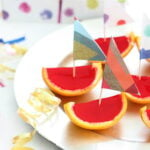 You can eat them with or without a spoon ... they provide heaps of photo potential and the kids love them. Young and old and very old.

Allow time for the jelly to set - you will probably need a few hours.