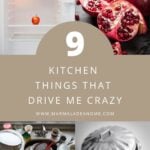 I think there's a risk that because I cook a lot and write about it and take pictures of it, people start to believe that everything in my kitchen always goes to plan - that I never have disasters and that I'm always filled with inspiration and that I never have a meltdown somewhere between the dishwasher and the biscuit tin ....

Guess what? My kitchen has just as many 'hot mess' situations, annoying frustrations and 'GGGRRRRrrrrrr' moments as yours. Truly it does.