Home » Life » What I learned about teaching teenagers to cook 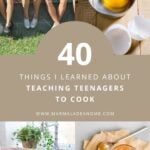 I spend a lot of time cooking.

I experiment, I perfect, I have monumental fails, I have delicious successes. I also share and inspire and teach. Initially, I assumed that because I spend so much time in the kitchen, my own children would learn to cook by seeing me at work and eating the experiments (the bad as well as the good). But this is developing familiarity rather than learning and although familiarity builds confidence, I began to realise there was most definitely a significant knowledge and skill gap that needed bridging if my teenagers were to be able to hold their own in the kitchen.

Let's be clear - my responsibility here was to teach the basics (there would be no bearnaise sauce or perfect chocolate soufflés on my watch!) and to ensure that my children could look after themselves, be independent and not have to rely too heavily on expensive processed foods - we are talking essential life skills. Everything else (including bearnaise and soufflés) can be learned from YouTube.

We began with nine weeks of Teenagers Tackle, where #1 and #2 teenage sons tackled a recipe from the blog once a week. This proved to be a great introduction. There has been dabbling from both of them ever since and Hella has also joined in on the kitchen action.

It's been a journey for us all and in this post, I'm sharing what I've learned about teaching teenagers to cook. In summary, I would say that I've learned that it needs to be fun or competitive or delicious or set to a banging Spotify playlist to keep them engaged - preferably all of the above! And my other big learning is around not assuming knowledge; some of the things that my teenagers didn't know really surprised me. Goodness, there was so much that I took for granted!

It needs to be fun or competitive or delicious or set to a banging Spotify playlist to keep teenagers engaged in the kitchen - preferably all of the above!

So, I've divided the lessons learned into five sections -

1. What are the basic skills that teenagers need be able to cook?

It's not all about mastering the art of cooking from scratch ... learning to read the instructions on the packet, using the equipment in the kitchen and sorting out the timings so that everything is ready at the same time are all essential kitchen skills.

2. How can we take those basic skills to the next level?

3. And how about some thoughts on safety in the kitchen -

There's a lot that can be dangerous in the kitchen but a few simple concepts can arm our teenagers with the knowledge to be able to cook safely and not poison anyone.

4. Choosing dishes for teenagers to cook

You know your teenagers better than anyone, but here's what I've learned about choosing dishes that will engage -

5. And finally, what kind of parenting is most helpful when teaching teenagers to cook?

Letting our teenagers loose in the kitchen can be a big step for parents as well as our budding chefs. We need to be patient, to give our teenagers space to learn and experiment, but also to make revolting disasters as well as triumphs. Encouragement is key here and trust. As well as a continual reminder of the importance of washing up afterwards!