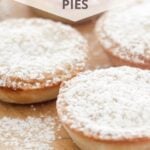 Freeze your mince pies uncooked and be ready to have freshly cooked pies on hand at a moment's notice ...

And let me share a secret with you ... I 'baked' fresh mince pies yesterday, crash bang in the middle of a busy, hectic day. They were straight from the freezer so the 'hands-on' time was less than 5 minutes -  and they were gorgeous. Plus I suspect that they'd been in the freezer since last Christmas. Sshhh - I won't tell if you don't!

At this time of year, I often think of a story that a friend told me about Christmas baking. My friend and her husband were both working full-time and with three young sons to manage they decided to employ an au pair to lighten the load at home. The young girl was from overseas (I forget exactly where) and as Christmas approached, my friend, a keen cook, thought it would be nice to teach her young helper how to make the classic English festive bakes. They began with Christmas Cake - TICK ...  moved on to Christmas Pudding - TICK ... and ended up with mince pies - TICK ... the full holiday baking repertoire. Miss Au Pair loved embracing the spirit of seasonal baking but then made a very reasonable and rarely uttered observation - "But aren't these bakes really all the same?". Never has a truer word been spoken! Indeed Christmas cake, pudding and mince pies certainly are all on the same theme with similar ingredients and the resulting comparable flavours but they're traditional - traditional, indulgent and delicious. And Christmas only comes once a year so it's not like you're going to get fed up with them. That's my excuse and I'm sticking with it.

What makes a fantastic mince pie?

Let's start with the mincemeat. There is no doubt that homemade tastes best, but at this time of year when you're up to your ears in everything, let's be realistic - this may not be the top of your priority list. If I'm going to make my own, I'll use this recipe from Delia and I'll do it early to get it out of the way - before there's even a hint of festivity in the air, but the best-laid plans ...

Bought mincemeat is fine. Correction ... it's more than 'fine', it makes for gorgeous mince pies but ONLY with gorgeous pastry.

I'm deferring to my Nan again for this one. She was Bertha (if you're trying to build a picture of her ...) - a name that you don't hear too much now. Bertha knew her pastry and for mince pies it was her legendary 'German pastry'. I've never heard anyone else refer to it with this name but it's essentially a sweet pastry with egg used as the binder. This makes for an almost biscuit-like flavour and texture and a consistency that is very easy to work.

So her secret to making gorgeous mince pies was using her German pastry, rolling it fairly thinly and not being mean with the mincemeat filling. She would also dust them with icing sugar after baking, although this did become the subject of an ongoing domestic battle. Family legend has it that Nan liked a dusting of icing sugar; her husband didn't - so she would dust and he would blow it off before eating. Dust. Blow. Dust. Blow ....  You get the picture. You must make up your own mind on the 'to dust' or not debate but for me the aesthetics of a sweet, snowy sprinkle wins every time.

Anyway, I digress - back to today's tip about the wonders of freezing uncooked mince pies ... Back in the day of our catering business, we would sell a lot, lot, lot of mince pies in the run-up to Christmas. We started out selling them baked, dusted (of course) and ready to eat, but soon realised that there was an enthusiastic market for Freeze Ahead Mince Pies selling them frozen, uncooked and ready to bake at home. We used the tagline "Pass them off as your own.  We won't tell if you don't ..." and they were a big seller.

So what is the secret to Freeze Ahead Mince Pies?

The secret to making this work is that wonderful invention - the flexible, silicone tray. No need to even grease it, but if it is very bendy, do stand the silicone tray on a solid baking tray to stop it from bending when you lift it up. Make your mince pies in the 'magic' silicone tray and pop the whole thing in the freezer when they are ready to bake (the end of stage 10). When they are completely frozen, they will easily pop out of their holes and can then be stored in a bag or box in the freezer until you are ready to use them. Don't forget that you'll need some space in your freezer, but you can sort that out can't you?

And how do you bake these Freeze-Ahead Mince Pies?

When you're ready to enjoy some freshly baked mince pies, take out as many as you need and pop them straight back into the holes of the silicone tray (no leaving them in the bag on the worktop to defrost or you will have a big mushy pastry mess!) and continue baking from stage 11. They will defrost very quickly but they are so small that they can also be popped straight into the oven if you prefer.

Freshly baked mince pies on tap - now that sounds like heaven. But beware ... before you know it, you'll have a reputation for being a Domestic Goddess.  I won't tell your secret if you don't ...

If you buy something through any of my links, I may earn an affiliate commission at no cost to you. I recommend only products that I genuinely like. Thank you. 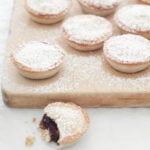 Freeze your mince pies uncooked and be ready to have freshly cooked pies on hand at a moment's notice ...