Well, our teenagers are on their 8th week in the kitchen and now that they've tackled dinner no less than seven times, it seemed only right that they turn their attention to another meal. How about breakfast?

#2 teenage son was home alone this time as his older brother was at a swim competition - a big one where you compete alongside your professional role models, swallow the same pool water as them (or maybe that's just me) and generally stalk your heroes to understand the lives and minds of pro swimmers. Ask him about when he was standing at the urinals and found that he had a hard-hitting, proper professional, world-record-breaking swimmer standing on either side of him. Now that's a lesson in performance pressure if ever there was one.

Anyway, while #1 teenage son rubbed shoulders with the swimming gods, #2 teenage son was getting down to business in the kitchen baking Overnight Date and Granola Muffins - wearing his trusty winter bobble hat of course + the AC on full. It's the fashion accessory that every teenager is wearing in the kitchen this season. 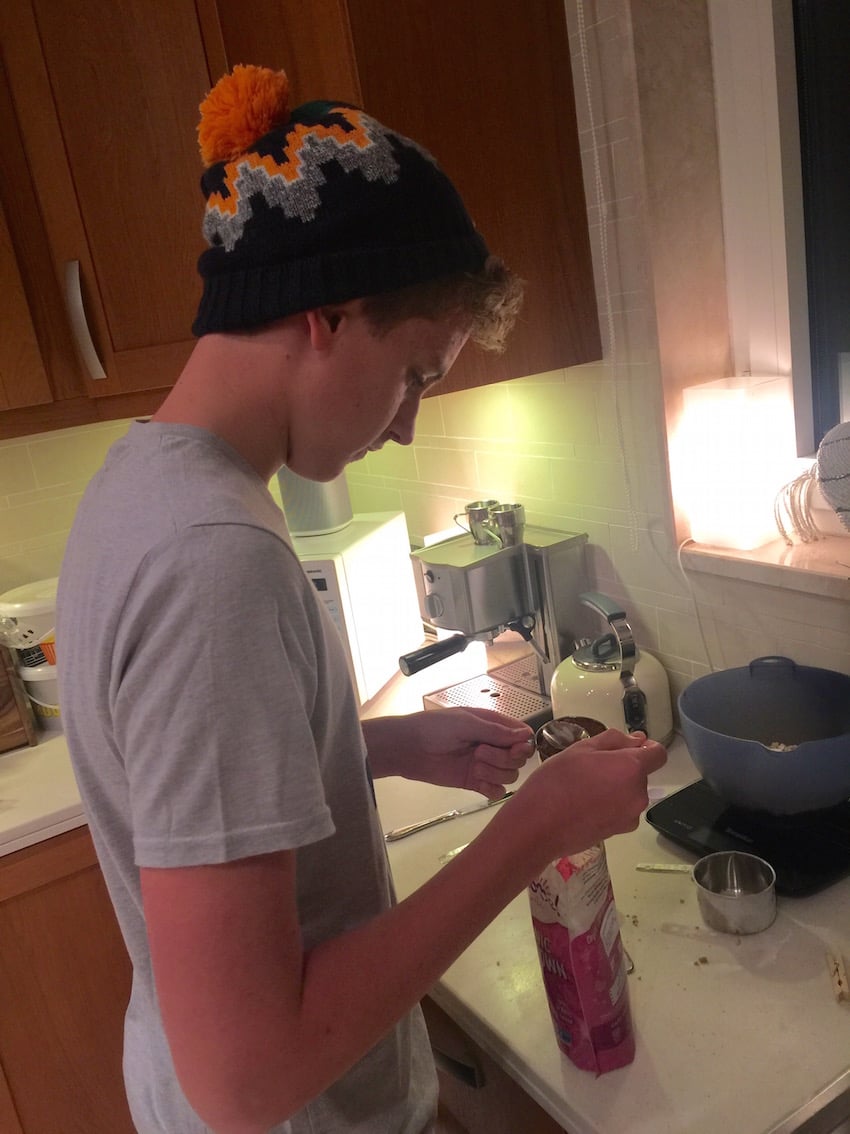 And what did this teenager learn?

And the mixture safely stowed in the fridge ready for the morning baking, the pizza delivery arrived so it was time for this teenager to tackle take out. Until tomorrow.

And what did I learn?

So how did the muffins for breakfast work out?

#1 teenage son took one bite of the muffins and declared that he, "could literally eat 5 of these in a row". Now I don't doubt that, but he's also always his younger brother's harshest critic, so that's quite a compliment.

And we all agreed. The muffins were delicious, especially paired with some fresh fruit and a few extra croissants for the big eaters. We also discovered that serving them with the Baked Rhubarb with Orange and some thick Greek yoghurt is even lovelier. And feels pretty special too. Is it wrong to just place an order for my birthday breakfast?

It's also clear that there's a special kind of brownie point to be earned from baking fresh muffins for breakfast. Tackling dinner is great, but laying on a special breakfast spread may be even better. Perhaps we need a few more tries to be certain ...

And if you (and your teenagers) fancy joining us on this culinary journey do let us know by commenting and of course be sure to snap a photo of your dinner and hashtag it #marmaladeandme. I'd love to see how it goes for you.