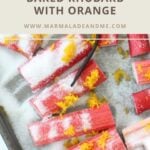 Breakfast on the beach anyone?

We're now through the hideous, hot, humid weather here in Dubai and we've moved into that (relatively) small window (and it is ALL relative) where it's perfect for breakfast on the beach. And we had guests with us from the UK too, so there's nothing better ...

On the menu was Nutella & Banana Muffins, a few extra croissants for the big eaters and a 'beach-ready-in-a-tupperware-box' fruit salad. We called in at our favourite café en route for a round of Date Smoothies and some sneaky extra coffees for the grown-ups. A veritable feast. But it didn't last long. Of course.

So in between muffin mouthfuls and smoothie slurps, the big question was ... "What's your favourite fruit?"  We only tackle the heavy, newsworthy issues here. And so we were off.

Teenage houseguest - Raspberries (£1.99 per punnet, you know.) Remember he works in a greengrocer back home in the UK

A minor diversion now, while we explore how funny it is that you only really use the word punnet for red(ish) soft fruits. Until #1 teenage son puts us right - "a Punnet Square is a diagram used by biologists to determine the probability of an offspring having a particular genotype - I'll have you know." Certainly more highbrow than softish red fruits. On closer inspection, though, we realise that this use of punnet is spelt with a double 't'. Shame.

Anyway, back to the main event ...

Me - Pomelo (they don't sell them in our UK greengrocers - but maybe they should). It's mostly my favourite because we were just eating a lovely one. But probably only my fave for that day - I'm fickle when it comes to favourites.

#1 teenage son - he needs more time to think. No change there. Don't EVER ask him what he would do if he won £1 million - unless you've got plenty of time on your hands. We'll come back to him later.

And back to #1 teenage son - he settled on a mango (59p each). But there was uncertainty in his eyes.

And finally my lovely husband - Rhubarb (there was head-scratching from our greengrocer on this one. Not many people buy it apparently.) And to be honest, we don't see it that often here in Dubai. But then, on my next trip to the supermarket, there it was with all its glorious hues. It may not be my favourite fruit but that colour is right up there.

So, my lovely husband, this one's for you - Baked Rhubarb with Orange. Perfect on a bowl of Greek yoghurt, a portion of porridge or just as it comes.

I have to admit that the pre-cooked rhubarb, sprinkled with sugar and speckled with orange did make me feel rather festive. And I'm thinking that a bowl of Baked Rhubarb with Orange could be a rather lovely addition to a Christmas morning spread. I'd go for that. 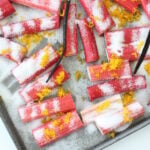 Perfect on a bowl of Greek yoghurt, a portion of porridge or just as it comes.

Tweaked from a recipe in The Guardian