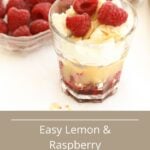 I'm not a big fan of desserts (I'll often opt for a starter over the sweeter option), but a cheesecake - now that's a different story. I'll take one baked, chilled, topped with fruits or bare but surprisingly I can't remember the last time I made one at home.

When I'm making a dessert (and that only really happens when it's an occasion), I like to create something that will be hassle-free by the time we're done with the savouries ... and for me that usually means -

And that's why these Easy Lemon and Raspberry Cheesecakes are a recipe that I return to again and again.

But let's be frank, we're not ACTUALLY making individual cheesecakes here - that sounds way too much like hard work. There was a time when a dessert like this would have been called 'deconstructed' but even that sounds heavier than it needs to be. So what is the secret to these Easy Lemon and Raspberry Cheesecakes?

So, create yourself an occasion, stock up on some lemon curd and you're half way to a dessert to remember.

I'm sure you'll be their number one fan. After me of course. 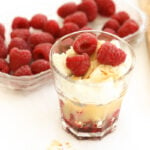 Create yourself an occasion, stock up on some lemon curd and you're half way to a dessert to remember.