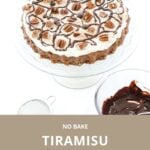 I've talked before about how Hella likes a game. Less so the board game variety, more the 'let's make up a game' variety. And when it's Saturday morning and you've done your homework, you've finished your piano practice and there's no swim training to attend ... what better way to spend an hour or two than to make up a game. And today's creation? The Blind Taste Test Challenge.

It's fair to say that as a family we're not unfamiliar with this concept. Bubba (my Dad), likes to do a 'compare the own brand (cheap) gin with the big name (expensive) gin' blind taste test. There's not a great deal of 'spitting out' that goes on, so by the last one, they all taste bloomin' marvellous. Funny that.

I've been known to get out a blindfold to test homemade lemon curd against Marks and Spencer's best. Incidentally, the verdict was 50:50, so probably not worth making your own unless you've got a lot of egg yolks to use up.

So back to this morning. Hella's game was called 'Taste 10 things that you find in the kitchen' and who was the lucky participant in her fun? My lovely husband of course. He soon decided that it was only fair for Hella to do some tasting too, so a flurry of scouring the fridge and the kitchen cupboards began. #1 and #2 teenage sons are never ones to miss out on the opportunity to inflict grossness on other people (especially their little sister) so they threw themselves into helping to create the perfect tens. There was, after all, a Ferrero Rocher at stake for the winner - "Ambassador, with these Ferrero Rocher, you are really spoiling us!"

And the result for my lovely husband? 8½ out of 10. Victory was within his grasp.

And a very respectable 8 out of 10 for Hella. So the winner, by a smidgeon, was my lovely husband. But to celebrate a hilarious family game (I've never seen both teenage sons so completely engaged) we decided to crack open the rather beautiful Tiramisu Cheesecake that I'd been photographing during all of the merriment. The Ferrero Rochers were safe for another day.

I've been making this dessert for years. It's another example of re-engineering a retro classic to become a bit more 'now'. It's a gingernut and pecan base, with a chocolate and coffee centre and topped with swirls of mascarpone and Greek yoghurt. Finally, it's decorated with pecans, melted chocolate and the traditional sprinkling of cocoa powder.

And why do I keep coming back to this Tiramisu Cheesecake?

So, grab yourself a blindfold, 10 tasters from the kitchen, plenty of water, a bowl to catch the more yucky of the taste tests and I can guarantee that a good time will be had by all. Just be sure to have something akin to a Tiramisu Cheesecake as a reward to enjoy afterwards. 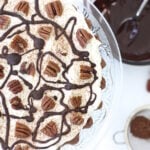 This is a gingernut base with a chocolate/coffee centre. Topped with swirls of mascarpone and Greek yoghurt, it's also gorgeously decorated.