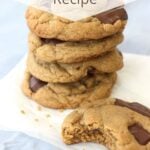 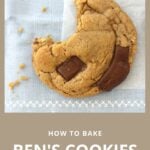 Do you know them? If you live in Bath, Brighton, Bristol, Edinburgh, London, Oxford, Reading, Dubai, Kuwait, Riyadh, Seoul or Singapore then you most probably will and if you don't ... then let me tell you all.

They are big; they have chunks and not chips and most importantly they are slightly gooey in the centre ... in fact, you could say that they are somewhere between a cake and a traditional cookie, especially when they are straight from the oven. Swoooooon. Oh my word, they are SO good. And the flavours - my favourite is the ginger and dark chocolate, but you can also tempt me with a white chocolate chunk (even though I'm not normally a fan), or a coconut or a milk chocolate chunk. In fact, just pass me the box. A large box.

And the branding (because I'm a sucker for great branding) is so very perfect. Striking, red background; black, scratchy lettering and a classic Quentin Blake illustration of Ben (I assume).

But they are also expensive and not right on my doorstep either, so being able to recreate Ben's cookies so that I could make them at home would be heavenly...

So, I started on the internet - of course. There are a handful of recipes that claim to have nailed it. I've tried them all and although they are all nice cookies, they are a million miles from the real McCoy. The first attempt spread so much that I ended up with one enormous 'baking tray' shaped cookie about a millimetre thick. There was talk by the children of re-branding as 'Ben's enormous pancakes' but ultimately it was - REJECT. The next few iterations were more successful but there was still room for improvement. Then I did a bit of research and discovered that the chain of shops was founded in 1984 by Helge Rubinstein. She wrote an iconic chocolate recipe book, so that had to be my next move.

A few small steps forward came next, followed by a couple of backward steps and then I was so very nearly there ... just a bit more of this and a bit less of that, until TA DAH - I had nailed it ... the Ben's cookie recipe - well, as close to the genuine article as is possible, without resorting to industrial espionage. And they are easy too. The end result FAR outweighs the effort.

Of course, the flavour that I focussed on was my own favourite - Ginger and Dark Chocolate. For sure, in time I will perfect some of the other flavours but right now we'll concentrate on savouring these big, chunky, gooey, rich, delicious cookies. You will adore them too. I promise. 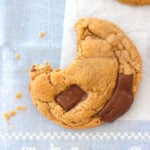 This recipe is for Ginger and Dark Chocolate, but check out my free downloadable e-book for 15 DELICIOUS recipes for your favourite cookies.

This recipe was refreshed in January 2021. My primary changes were altering the ratio of flours, moving from the (annoying!) '1 egg + 1 egg yolk' to 2 eggs and tweaking the instructions to make them more logical. Think you'll love them just as much - if not a tiny bit more!