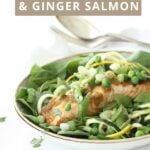 These last few weeks have felt busy - even busier than normal. There was all the usual stuff ... school, work, swimming, ballet, blogging (lots of behind the scenes blogging stuff in fact - so apologies if I've seemed less present) ... but plenty of extras too.

#1 teenage son was doing his GCSE Mocks. Twenty-something exams in 7 days is never going to be fun (or very representative of the real thing, I suspect) and for him there were definitely late nights, a mountain of flashcards (which of course is via an app) and lots of lists to tick off. There were ups and downs in the exams for sure -  a couple of them were in fact 'worse than the worst experience in his life EVER' ... and in case you were wondering, that was the time when a cherry yoghurt exploded in his lunchbox and went EVERYWHERE. Does it make me a bad mother that I secretly had a giggle at the yoghurt catastrophe? I didn't think so.

Well, the exams are over now - done and done - and may an exploding yoghurt continue to be the WORST THING EVER in #1 teenage son's life for a long time to come.

#2 teenage son has been on a photography frenzy getting to grips with his birthday gifts and experimenting with everything from time-lapse through the night, to the perfect shot of his own eye. Clever stuff.

And how about Hella? She has developed an obsession with being cosy and January through to March in Dubai is pretty much the only time when she has a fighting chance of any degree of cosiness. For the rest of the year, when it's 40 degrees outside, cosiness will be the last thing on her mind. So for her, the last few weeks have been about hot chocolate, spending the weekends in PJs and Ugg boots (only taking off her dressing gown when the sweat gets too much) and wrapping up in a blanket on the sofa to watch her favourite TV show (currently The Dengineers) - even if the AC has to go up to 'icy' to make the whole thing bearable. These things matter when you're 9.

And amongst all the busyness, I have been chilling out to quite a TV catch-up bonanza - yes, I'm that rock and roll -

And when I've managed to tear myself away from the TV there's been some cooking too - in particular, this Zesty Lime and Ginger Salmon - my current favourite healthy, speedy dinner. The salmon sits in an easy marinade for 15 minutes and is then baked in the oven. And that's the cooking part done.

I sit the fish on a bed of leaves and spiralized courgettes with a few peas and some mangetout to sprinkle over the top. A light, fresh and zesty mid-week dinner that leaves me feeling full of energy and ready to tackle ... another TV marathon.

Are you sold? Go on give this Zesty Lime and Ginger Salmon, a try ... 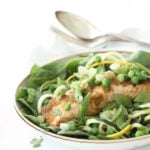 A light, fresh and zesty mid-week dinner that leaves me feeling full of energy and ready to tackle anything.

If you would rather bulk up this dinner with a few carbs, try cooking a little wholewheat spaghetti and tossing it with the spiralized courgettes and a drizzle of olive oil.