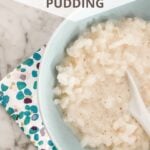 NOTE - I have refreshed this post for Classic, Creamy Rice Pudding with some new images and additional thoughts and suggestions. The recipe remains unchanged.

It's not modern or fashionable, but a bowl of homemade rice pudding ticks all the cosy, delicious, nostalgic boxes every time. It also involves absolutely no fuss and requires no attention while you get on with other things. Trust me on this, you won't be disappointed.

And then there is the big question ...... skin or no skin? For me, there is no debate. No pondering, no dwelling - it's crystal clear. There is absolutely only one answer - it's a big N.O. to skin on rice pudding ..... in fact I would go so far as to say that skin on rice pudding is the work of the devil and only serves to potentially destroy something utterly sublime.

But amazingly, not everyone feels the same. At the very least, my Mum is a BIG fan of the skin on rice pudding and will positively battle to make sure she gets it. No enormous battle is required when she's at our house though because here she's alone as its number one fan. And maybe that's a good thing. Maybe every house just needs one fan, so that the rest of the family can concentrate on the real deal - the delicious, creamy, comforting dessert that is Rice Pudding.

What is Rice Pudding?

It's a quintessentially English dish - so simple in its ingredients, so easy to make and so nostalgic too. It's short grain rice which is baked in sweetened milk and often also flavoured with nutmeg and vanilla. There are plenty of recipes for rice pudding that start to edge into being fancy, but in my opinion, this is a simple classic and sometimes only a simple classic will do. Maybe school dinners gave it a bad name, but now is the time to move on and give it another try.

How do you make this Rice Pudding?

Again, simplicity is everything here -

It is quite runny when it's straight from the oven, but get considerably thicker and creamier as it cools and the milk soaks further into the rice. This recipe is inspired by another English classic, Simon Hopkinson. I've adjusted his recipe and method to make sure it is no fuss, so do give it a try.

How should you serve Rice Pudding?

I like it warm, straight from the oven or chilled, straight from the fridge, but the choice is yours. For me, rice pudding is a dish that needs nothing added to it. It shouldn't be flavoured or garnished; pimped up or paired up ....... just leave it to 'be'. Having said that, if I WAS to serve it with something else, it would be some baked fruits - possibly rhubarb; probably plums.

Any leftovers work beautifully in little pots for packed lunches - it thickens quite considerably on chilling so feel free to add more milk if you like a looser consistency. And if leftovers are really what you fancy, be sure to make a double quantity - for young and old it is SO moreish ... with or without the skin ...... 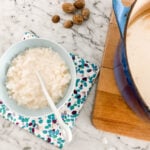 It's not modern or fashionable but a bowl of homemade rice pudding ticks all the cosy, delicious, nostalgic boxes every time. It also involves absolutely no fuss at and requires no attention while you get on with other things. Trust me on this - you won't be disappointed ...