I think I talk a lot about how breakfast works in our family. Weekend breakfast is a leisurely affair - often involving something hot + a lovely coffee for me. But breakfast during the week is a military operation with everyone knowing what they like and liking what they know. #1 teenage son likes his Bran Flakes (no matter how much I nag at him that it's not 'the food of champions' ... his words not mine. Although I wish Chris Hoy would get off the packet - he's not helping my case at all.) Hella will enjoy a Weetabix or two, regular milk + a bit of sugar - and 'more than a bit' of sugar if nobody is watching.

But #2 teenage son and I are more rock n roll about breakfast than the rest of the family. We both like to mix it up a bit depending on our mood. For #2 teenage son it might be Bran Flakes, but equally, it could be Weetabix and sometimes he may even live on the edge with a slice or two of toast. There are some things that remain constant for him though. If there's milk involved it will be soya milk (Waitrose, slightly sweetened) and there will always be a book strategically positioned by his bowl/plate - you never want to miss an opportunity to read a chapter or two now do you?. And the soundtrack to this breakfast scene will mostly be me saying (sternly), "Put. The. Book. Down." Things you never thought you'd hear yourself say.

For me, mixing it up at breakfast is all about toppings. I enjoy a bit of cereal at breakfast. I also like a yoghurt every now and then. But what I especially love is a topping to liven up my cereal or my porridge or my yoghurt. And I do like to ring the changes. Blueberries work for me. Strawberries do too. A banana is great when it's at optimum ripeness - no green, but equally no brown. But most of all, I enjoy something fruity that's been cooked to bring out all the flavour and to produce a gorgeous, syrupy sauce.

Now let's return to #2 teenage son for a moment. He LOVES his fruit. Always has done. Pre-school, we would sit and have lunch together, and if there was a choice, he would opt for a fruit salad every time. And an episode of the very tragic, Des and Mel come to think of it. His taste in TV has moved on, I'm relieved to say. But his love for fruit and fruit salad remains. He is at his lunchtime happiest when his lunchbox contains majority fruit and his snack of choice when we're out and about is often still a fruit salad. Maybe he was a gorilla in a former life. But come to think of it, he's not a great banana fan. Strike the gorilla theory.

Plums are a particular favourite of his and he will demolish a fruit bowl piled high with them. No drama. But you know how it is .... sometimes plums promise the world but taste like the pits - dry, cotton woolly, utterly tasteless - and when this happens they do often hang around for a while. Bring on these Roasted Plums with Vanilla Sugar.

So how do these Roasted Plums with Vanilla Sugar turn the mediocre into the marvellous?

Do you remember how I talked about how by roasting tomatoes you can coax some flavour out of even the dullest, most lack-lustre of the crop? Well, the same applies to plums. Sprinkle them with a bit of brown sugar - here I added the heavenly scrapings from a vanilla pod to the sugar to create my 'vanilla sugar' (but no drama if it's just regular sugar) - and then I roasted them in the oven until the fruits were soft and juicy and they had produced their own stunning, pink syrup. The texture becomes perfect too  - moist and juicy - a million miles away from the cotton wool spectrum.

It's worth sharing that on my first attempt at Roasted Plums with Vanilla Sugar, I popped them in the oven and then got on with cooking poached eggs for the family. Let's just say that my mind was squarely off the plums and onto the eggs and I only remembered them when the acrid smoke from the oven started to interfere with my breathing. Thank heavens for baking parchment I say - or that would have been 'another baking tray bites the dust' for sure.

So, I love these Roasted Plums with Vanilla Sugar, and so does #2 teenage son. Now let's see if we can convince you to join our club -

There are always some keen takers to demolish what I've been cooking once the photos are finished. I'll give you one guess who was at the front of the queue this time?

So, the next time you have a few dodgy plums knocking about, give these Roasted Plums with Vanilla Sugar a try. Or just throw caution to the wind and buy some plums especially to make this recipe. Go on ... live on the edge. 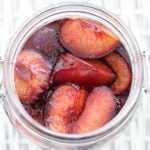 Roast the plums in the oven until the fruits are soft & juicy and they have produced their own stunning, pink, vanilla syrup.