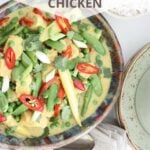 #2 teenage son is convinced that his bedroom is the house dumping ground. Maybe it’s the six-foot artificial Christmas tree in his wardrobe and the collection of camping gear that we have accumulated over 10 years – even though we’ve only ever been twice. It could be the two (enormous) memory boxes stashed in there – filled with mementoes that I treasure, but, to be honest, are of little interest to him. Then there’s the ‘fold-down table’ which just doesn’t really work anywhere else in the house, but is too useful to get rid of. Oh and let’s not forget the two gigantic sombreros – don’t ask.

Maybe he has a point.

So, in an attempt to get him off my case and to help him to love his room a bit more, I decided that a coat of paint would be a good plan + a bit of a de-clutter.

When your children are little … and even when they’re medium-sized, they seem to want to be wherever you are. Even if you have a reasonably sized house with plenty of rooms, they’ll be where you are – on top of you. But nobody tells you that with teenage years it’s all change and their bedroom becomes their place of choice – I guess because it’s where you’re not.

It’s the venue for homework, for hanging out, for screen time, for sleeping (lots of) …. So, as a teenager, you need to love the room you have – because you see a lot of it.

After narrowly missing a paint catastrophe where the decorator thought my colour of choice was a dark, sludgy brown (when in fact it was a stylish, subtle pale grey), ‘we’ were off.

I am the slowest painter in the world, so I’m always astonished at how quickly other people can make it happen. It doesn’t help that my weapon of choice tends to be a 1-inch brush – so best to leave me with woodwork and edges. And even then, don’t be in any kind of hurry. But get me onto decluttering and I’m SPEEDY. Really SPEEDY. A couple of bin bags filled on the first run through and then I moved onto the books, finding a few that Hella might enjoy, particularly a pile of Enid Blyton mysteries. You know that a book is dated when the opening sentence introduces characters called Larry and Fatty and the second sentence reads, “Golly, that was a wizard one that we had in the Christmas hols, wasn’t it?” Mmmm, maybe language has moved on a bit since Enid put pen to paper?

Anyway, after the painting and the decluttering came re-building the room (chucking out a few more bits along the way) and this seemed to be the part that took the time. So, having a handy slow cooker dinner doing its thing in the kitchen while I was doing my thing in the teenage cave felt like a plan. A 'wizard' one, even.

You know about my track record with slow cookers. Hit and miss to say the least, but this time I feel I made a huge leap forward and here's what made the difference -

Cutting the vegetables really thinly and throwing them into the slow cooker just before you serve = VIBRANT colours, great FLAVOUR + a bit of CRUNCH

Why have I never done this before?

So what is special about this Slow Cooker Ginger and Coconut Chicken?

This dish is adapted from Simple Bites and was quite honestly a big hit. The chicken is tender (but not disintegrating), the spice can be adjusted to your taste (the levels I've included in the recipe suited the whole family - even our 10-year-old daughter), the creamy coconut got a big thumbs up and those last-minute vegetables really sealed the deal.

You still get all the benefits of being able to do the prep earlier in the day and reap the rewards later when you've lost the will, but dinner doesn't taste like a compromise.

And even if your day doesn't involve a teenager room makeover, put this Slow Cooker Ginger and Coconut Chicken on your TO DO list - it's a good one. Golly, it is ... 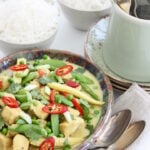 The secret to this slow cooker recipe is to prepare the vegetables beforehand and then throw them into the slow cooker 30 minutes before the end of the cooking time. The result is VIBRANT colours, great FLAVOUR + a bit of CRUNCH. Serve with rice and perhaps a flatbread or two.