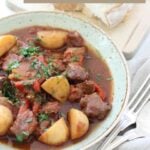 Will you ever forgive me?

I know, I know ... I've said a lot of mean things about you over the years. I've chuckled in agreement when others have complained that their success rate with you rarely tops 4% and I've dined out endlessly on the story of a whole family cheering when Mum had a mishap in the kitchen and smashed the slow cooker pot into a million pieces. Yes - it's fair to say, I haven't held back.

But you and I both know there have been some good times. That Red Lentil and Bacon Slow Cooker Soup was a spectacular success and has a firm place in our family's repertoire and as for the No Fuss Chicken Stock - well that, my friend, was a game-changer.

But there's been nothing else. NOTHING AT ALL. And it hasn't been for want of trying. And that's because I have constantly been telling myself, "This should work. This should be a kitchen saviour in a busy life. This should be my best friend."

But all that trying has been fruitless ...

Just when I was on the verge of giving up on you - it happened. A gem. A beauty. A triumph of a slow cooker meal. And its name? Slow Cooker Spanish Pork. Pork shoulder gently braised in a tomato sauce, spiked with sweet paprika, taken to the next level with a touch of chorizo and turned into a meal in its own right with some baby potatoes and a couple of red peppers.

I'll admit ... the first time I thought it may have been a fluke ... a trick of the eye ... a teasing of the tastebuds. But the second time, it was still spectacular. And the third time, just as good as the first.

And what is it about this Slow Cooker Spanish Pork that turned my head?

So thank you my new best friend. Let's hope this proves to be more than a fleeting fling and that we can continue to make sweet music together.

Lots of love, me xxxx 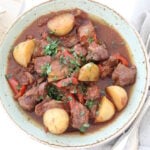 Pork shoulder gently braised in tomatoes, spiked with sweet paprika and taken to the next level with a touch of chorizo.