Home » Sandwiches » TikTok Wraps (with fillings to suit your mood) 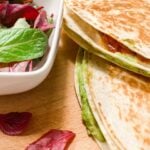 Look, I'm not a TikTok regular but my daughter is and she shares with me some of the fun/weird/hilarious/genius things that show up on there. I'm less keen on the dances that she tries to get me doing - I can confirm that I am truly, properly awful - but I AM a fan of some of the genius tips. Remember the Gooey Chocolate Mug Cake? That was also a TikTok gem.

So here's another game-changer of an idea, courtesy of the platform. It's not hot off the press (it's taken me a while to get to this - sorry about that) but neither is it a flash in a pan - this feels like a viral trend that's here to stay. TikTok wraps are a clever spin on a quesadilla (ie a tortilla filled with tasty things and cooked in a pan to crisp up and melt the insides). They come together easily, are crispy on the outside and gooey and tasty on the inside. And MOST importantly, they make for easy eating and less filling ‘spillage’ - which is huge!

So what is so genius about TikTok wraps?

The genius of these wraps is in the folding and the clever single cut you make in the wrap. Basically, you make a cut down to the centre of your wrap, then divide your fillings into the four quarters, fold it all up, then pan-fry. Confused? Let me explain with some pictures - I promise you, it's super easy. Weirdly fun too!

Here's how it works -

Why I chose these fillings?

These TikTok wraps are a great opportunity to freestyle and create your own combinations, but understanding why I chose these four fillings might be helpful.

Here are 5 ideas for other filling combinations -

Thank you, TikTok for the inspiration. Now I must get back to working on perfecting my TikTok dance moves …

TikTok Wraps (with fillings to suit your mood) 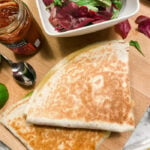 TikTok wraps are a clever spin on a quesadilla. They come together easily, are crispy on the outside and gooey and tasty on the inside. And MOST importantly, they make for easy eating and less filling ‘spillage’ - which is huge!

To cook the wraps -